In 451, during the reign of the Sovereigns Marcian and Pulcheria, the Fourth Ecumenical Council was convoked in Chalcedon against Eutyches and those of like mind with him. After much debate,the Fathers who were the defenders of Orthodoxy, being 630 in number, agreed among themselves and with those who were of contrary mind, to write their respective definitions of faith in separate books, and to ask God to confirm the truth in this matter. When they had prepared these texts, they placed the two tomes in the case that held Saint Euphemia’s relics, sealed it, and departed. After three days of night-long supplications, they opened the reliquary in the presence of the Emperor, and found the tome of the heretics under the feet of the Martyr, and that of the Orthodox in her right hand. 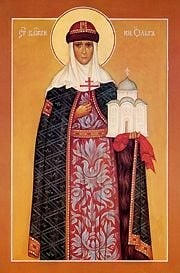 Saint Olga, renowned for her wisdom and sobriety, in her youth became the wife of Igor, Great Prince of Kiev, who ruled during the tenth century. After her husband’s death, she herself ruled capably, and was finally moved to accept the Faith of Christ. She traveled to Constantinople to receive Holy Baptism. The Emperor, seeing her outward beauty and inward greatness, asked her to marry him. She said she could not do this before she was baptized; she furthermore asked him to be her Godfather at the font, which he agreed to do. After she was baptized (receiving the name of Helen), the Emperor repeated his proposal of marriage. She answered that now he was her father, through holy Baptism, and that not even among the heathen was it heard of a man marrying his daughter. Gracefully accepting to be outwitted by her, he sent her back to her land with priests and sacred texts and holy icons. Although her son Svyatoslav remained a pagan, she planted the seed of faith in her grandson Vladimir. She reposed in peace in 969.

Apolytikion for Great and Holy Pascha in the Plagal First Mode
Χριστός ἀνέστη ἐκ νεκρῶν, θανάτῳ θάνατον πατήσας, καί τοῖς ἐν τοῖς μνήμασι ζωήν χαρισάμενος.
Christ is risen from the dead, by death, trampling down upon death, and to those in the tombs He has granted life.
Reading is under copyright and is used with permission, all rights reserved by: Greek Orthodox Archdiocese of America.

Resurrectional Apolytikion in the Second Mode
Ὅτε κατῆλθες πρὸς τὸν θάνατον…
When Thou didst descend unto death, O Life Immortal, then didst Thou slay Hades with the lightning of Thy Divinity.  And when Thou didst also raise the dead out of the nethermost depths, all the powers in the Heavens cried out:  O Life-giver, Christ our God, glory be to Thee.
Reading is under copyright and is used with permission, all rights reserved by: Holy Transfiguration Monastery

Apolytikion for Holy Myrrhbearers Sunday in the Second Mode
Ὁ εὐσχήμων Ἰωσήφ…
When Thou didst descend unto death, O Life Immortal, then didst Thou slay Hades with the lightning of Thy Divinity.  And when Thou didst also raise the dead out of the nethermost depths, all the powers in the Heavens cried out:  O Life-giver, Christ our God, glory be to Thee.
Reading is under copyright and is used with permission, all rights reserved by: Holy Transfiguration Monastery

Apolytikion for Holy Myrrhbearers Sunday in the Second Mode
Ταῖς Μυροφόροις Γυναιξί…
Unto the myrrh-bearing women did the Angel cry out as he stood by the grave:  Myrrh oils are meet for the dead, but Christ hath proved to be a stranger to corruption.  But cry out:  The Lord is risen, granting great mercy to the world.
Reading is under copyright and is used with permission, all rights reserved by: Holy Transfiguration Monastery

Apolytikion of St. Demetrios in the Third Mode
Μέγαν εύρατο εv τοίς κιvδύvοις …
Greatness has been found in danger.  You are champion of the world.  A victor who could turn the nations back.  You boldly encouraged Nestor to defeat Lyaeus in the arena.  Therefore, holy great martyr Demetrios, intercede with Christ our God, to grant us His great mercy.

Seasonal Kontakion in the Plagal Fourth Mode
Εἰ καὶ ἐν τάφῳ κατῆλθες ἀθάνατε…
Though You went down into the tomb, You destroyed Hades’ power, and You rose the victor, Christ God, saying to the myrrh-bearing women, “Hail!” and granting peace to Your disciples, You who raise up the fallen.
Reading is under copyright and is used with permission, all rights reserved by: Narthex Press

Prokeimenon. Second Mode. Psalm 117.14,18.
The Lord is my strength and my song.
Verse: The Lord has chastened me sorely.

The reading is from Acts of the Apostles 6:1-7

In those days, when the disciples were increasing in number, the Hellenists murmured against the Hebrews because their widows were neglected in the daily distribution. And the twelve summoned the body of the disciples and said, “it is not right that we should give up preaching the word of God to serve tables. Therefore, brethren, pick out from among you seven men of good repute, full of the Spirit and of wisdom, whom we may appoint to this duty. But we will devote ourselves to prayer and to the ministry of the word.” And what they said pleased the whole multitude, and they chose Stephen, a man full of faith and of the Holy Spirit, and Philip, and Prochoros, and Nicanor, and Timon, and Parmenas, and Nicolaos, a proselyte of Antioch. These they set before the apostles, and they prayed and laid their hands upon them. And the word of God increased; and the number of the disciples multiplied greatly in Jerusalem, and a great many of the priests were obedient to the faith.

At that time, Joseph of Arimathea, a respected member of the council, who was also himself looking for the kingdom of God, took courage and went to Pilate, and asked for the body of Jesus. And Pilate wondered if he were already dead; and summoning the centurion, he asked him whether he was already dead. And when he learned from the centurion that he was dead, he granted the body to Joseph. And he bought a linen shroud, and taking him down, wrapped him in the linen shroud, and laid him in a tomb which had been hewn out of the rock; and he rolled a stone against the door of the tomb. Mary Magdalene and Mary the mother of Joses saw where he was laid. And when the sabbath was past, Mary Magdalene, and Mary the mother of James, and Salome, bought spices, so that they might go and anoint him. And very early on the first day of the week they went to the tomb when the sun had risen. And they were saying to one another, “Who will roll away the stone for us from the door of the tomb?” And looking up, they saw that the stone was rolled back; for it was very large. And entering the tomb, they saw a young man sitting on the right side, dressed in a white robe; and they were amazed. And he said to them, “Do not be amazed; you seek Jesus of Nazareth, who was crucified. He has risen, he is not here; see the place where they laid him. But go, tell his disciples and Peter that he is going before you to Galilee; there you will see him, as he told you.” And they went out and fled from the tomb; for trembling and astonishment had come upon them; and they said nothing to anyone, for they were afraid.

Evangelos Iliakis (40 days) survived by his wife Cleopatra and by children Michael, Elizabeth, and Harriet.

Mary Varvarigos (40 days) survived by her daughter, by her dear friend Loretta Vulcano, and by the St. Demetrios Visiting Angels.

Basil Pagones (1 year) Beloved husband of  Carol, father of Anastasia (Selim), and Tim (Lisa), grandfather of Alex and Alara, and friend to many at St. Demetrios.

Maria Konstantinidis (9 yrs) survived by her husband Dimitrios, 3 children, 8 grandchildren, and her sister.

We ask you to support the worship, service and activities of St. Demetrios Church. Giving to His Church is a way to thank God for His grace, His generosity and His many blessings. Let’s Step Up our gifts of Time Talent and Treasure!

Please fill out a pledge form by either downloading the form below or by visiting https://stdemetrios.org/our-parish/stewardship/stewardship-form/

You can make contributions towards your financial pledge by visiting https://stdemetrios.org/make-a-donation/ . 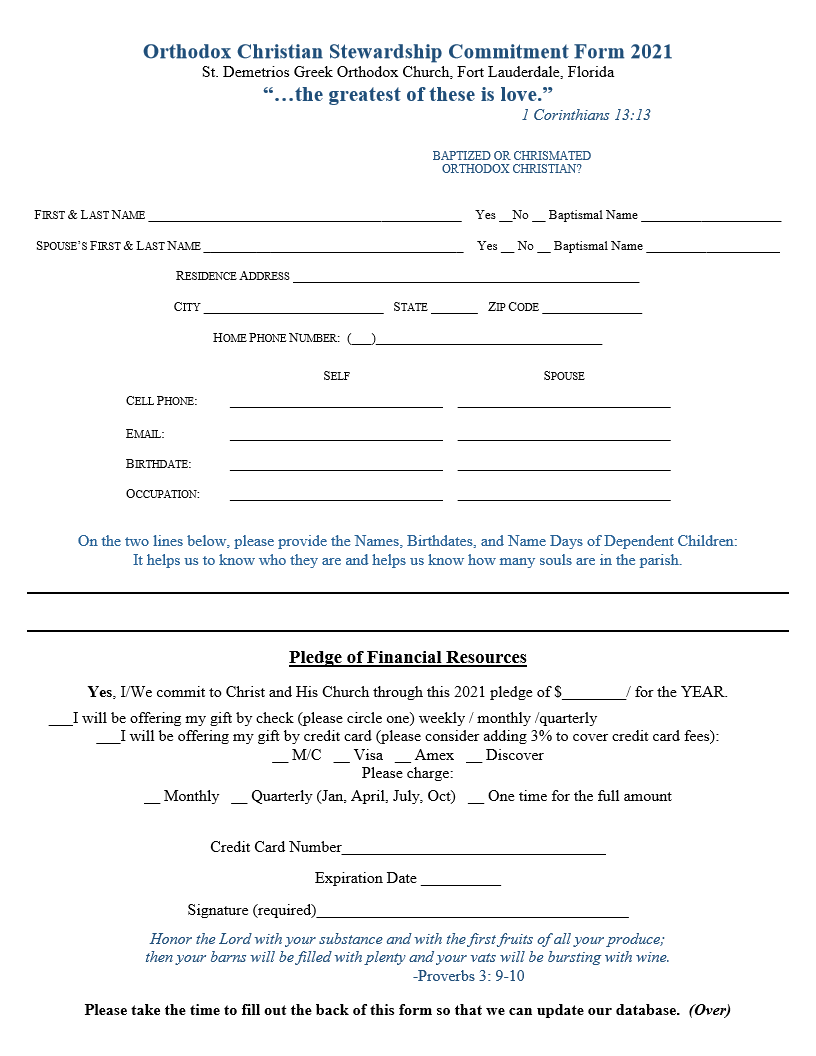 Join us in congratulating Fotini Anastasiou, Theo Cockrell, Xander Economou, Benjamin Martin, and George Planakis on their high school graduation. We wish them all the best! 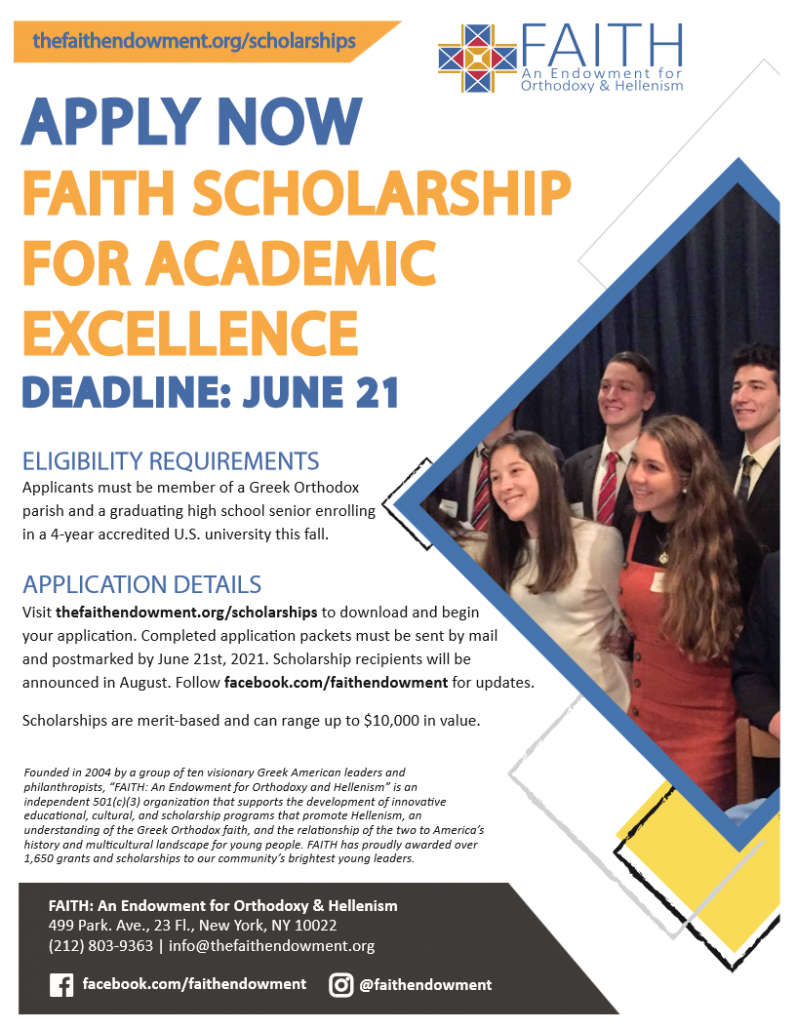 The Ladies of Philoptochos would like to sincerely thank all those who were able to donate to the Covenant House fundraiser. Through your generosity we were able to deliver $745 worth of gift cards!

God bless you all. 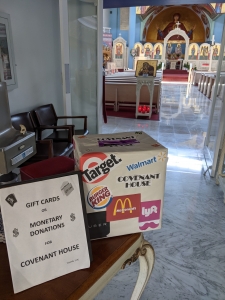 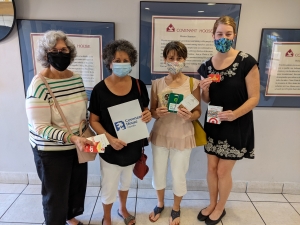 SAVE THE DATE:  Afternoon BINGO PARTY is scheduled for Saturday, June 19 in the Church Hall.  (Social distancing will be observed.)  Doors open at 11:30am and games begin at 12:00 noon.  Pizza and beverages will be for sale.  Bring family and friends to this fun event with prizes and 50/50 raffle.  Sponsored by Philoptochos. 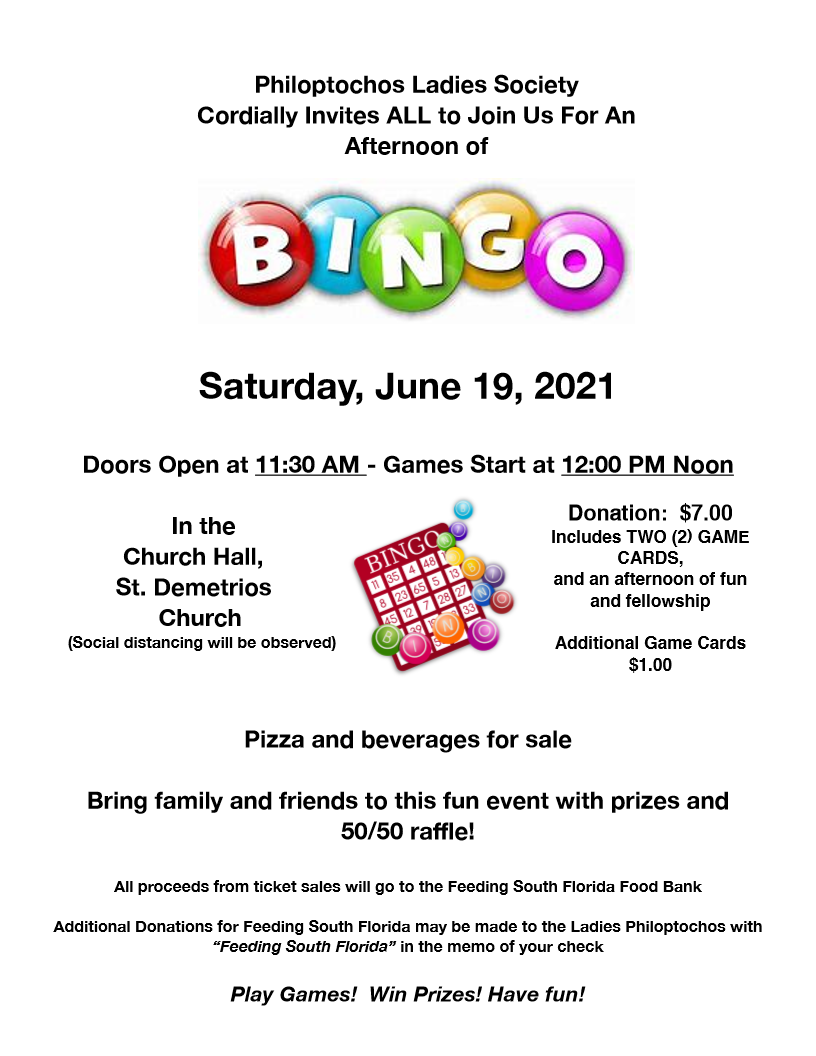 The Philoptochos of the Metropolis of Atlanta and His Eminence Alexios have asked us to help them fulfill our Metropolis commitment to the rebuilding of the St Nicholas Greek Orthodox Church and National Shrine in New York City.  This is the church which was destroyed during the 9/11 attacks.  They have asked that  families donate $20 or whatever they are able.  Donations may be made online at https://ladies-philoptochos-of-st-demetrios.square.site/ or by check made out to St. Demetrios Ladies Philoptochos.  Please put “St. Nicholas” in the memo section.

The Daughters of Penelope, Narcissus Chapter 289 invite you to join us for the  2021 – 2022 Installation of Officers with St. Demetrios Philoptochos and The Pap Corps End of  Year Luncheon Meeting  Saturday May 22, 2021 at 11:30 am.  For details, please see flyer. 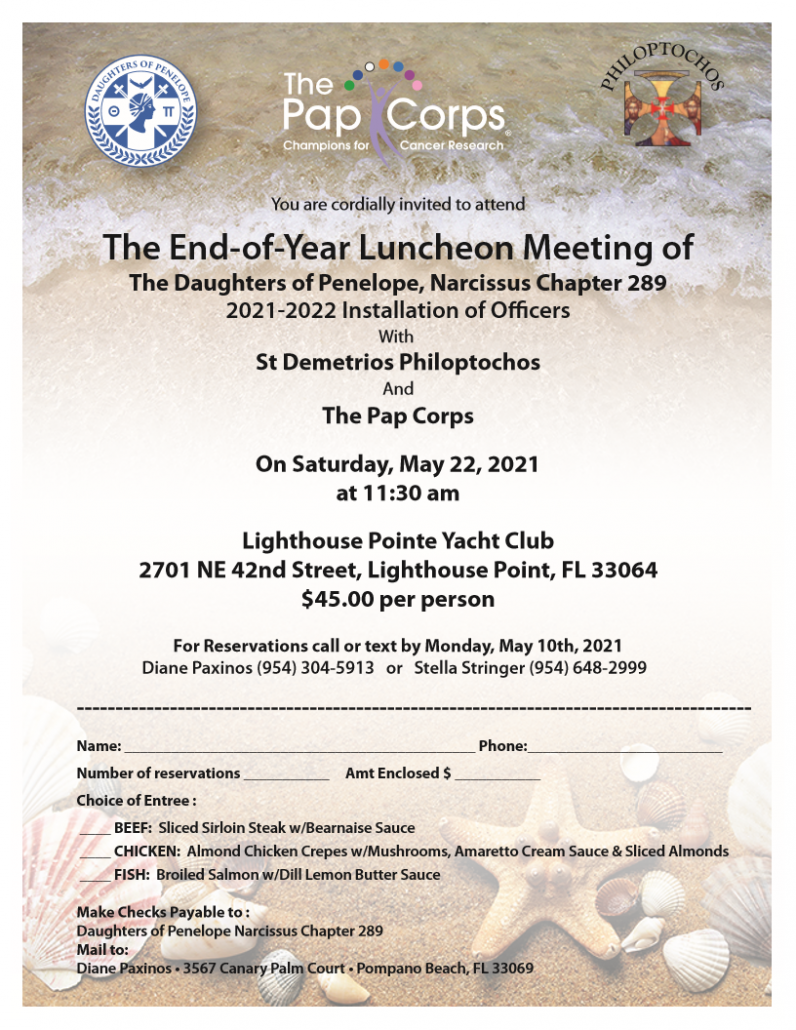 Late last year, the Assembly of Bishops assembled a Mental Health Task Force to assist our Churches in this very important ministry to the faithful. I am therefore very pleased to announce that, as the result of the work of the Task Force, a National Directory of Orthodox Mental Health providers has been created. Visit  https://www.assemblyofbishops.org/directories/mental-health/ .
I join my fellow Hierarchs in thanking the Steering Committee of the Mental Health Task Force, and all those Orthodox Professionals who participated in the creation of this directory, so that it might help the greatest number of individuals.

Praying for the continued health of all, both in body and soul, I remain,

Paternally yours with love in Christ,

+ A L E X I O S
Metropolitan of Atlanta

The Liturgical Guide and Bulletin for Sunday, May 16th 2021 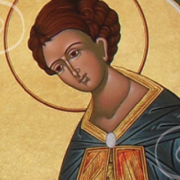 The Liturgical Guide and Bulletin for Sunday, July 4th 2021

The Liturgical Guide and Bulletin for Sunday, July 18th 2021
Scroll to top