Εύφραινέσθω τα ούράνια…
Let all things above in heaven rejoice, and let all things below on earth be glad. With all the might and strength of His arm an eternal deed the Lord did perform. Beneath His feet He has trampled down death by death, and first born of the dead has He become. From the womb of Hades has He delivered us, and to all the world has granted His great redeeming mercy.

Apolytikion for Apodosis of the Dormition in the First Mode

Εν τή Γεννήσει τήν παρθενίαν εφύλαξας…
In giving birth, thou didst preserve thy virginity; in thy dormition, thou didst not forsake the world, O Theotokos. Thou wast translated unto life, since thou art the Mother of Life; and by thine intercessions dost thou redeem our souls from death.

Μέγαν εύρατο έν τοίς κινδύνοις…
The world found in you a great champion in dangers a victor who could turn the nations back! As you restrained Levi in the arena, you also inspired Nestor to courage! Therefore, holy, great martyr, Demetrios, entreat Christ God to grant us great mercy!

Seasonal Kontakion in the Second Mode

Τήν εν πρεσβείαις ακοίμητον Θεοτόκον…
Neither the grave nor death could contain the Theotokos, the unshakable hope, ever vigilant in intercession and protection. As Mother of life, He who dwelt in the ever-virginal womb transposed her to life.

August 29
Beheading of the Holy and Glorious Prophet, Forerunner and Baptist John

The divine Baptist, the Prophet born of a Prophet, the seal of all the Prophets and beginning of the Apostles, the mediator between the Old and New Covenants, the voice of one crying in the wilderness, the God-sent Messenger of the incarnate Messiah, the forerunner of Christ’s coming into the world (Esaias 40: 3; Mal. 3: 1); who by many miracles was both conceived and born; who was filled with the Holy Spirit while yet in his mother’s womb; who came forth like another Elias the Zealot, whose life in the wilderness and divine zeal for God’s Law he imitated: this divine Prophet, after he had preached the baptism of repentance according to God’s command; had taught men of low rank and high how they must order their lives; had admonished those whom he baptized and had filled them with the fear of God, teaching them that no one is able to escape the wrath to come if he do not works worthy of repentance; had, through such preaching, prepared their hearts to receive the evangelical teachings of the Savior; and finally, after he had pointed out to the people the very Savior, and said, “Behold the Lamb of God, Which taketh away the sin of the world” (Luke 3:2-18; John 1: 29-36), after all this, John sealed with his own blood the truth of his words and was made a sacred victim for the divine Law at the hands of a transgressor.
This was Herod Antipas, the Tetrarch of Galilee, the son of Herod the Great. This man had a lawful wife, the daughter of Arethas (or Aretas), the King of Arabia (that is, Arabia Petraea, which had the famous Nabatean stone city of Petra as its capital. This is the Aretas mentioned by Saint Paul in II Cor. 11:32). Without any cause, and against every commandment of the Law, he put her away and took to himself Herodias, the wife of his deceased brother Philip, to whom Herodias had borne a daughter, Salome. He would not desist from this unlawful union even when John, the preacher of repentance, the bold and austere accuser of the lawless, censured him and told him, “It is not lawful for thee to have thy brother’s wife” (Mark 6: 18). Thus Herod, besides his other unholy acts, added yet this, that he apprehended John and shut him in prison; and perhaps he would have killed him straightway, had he not feared the people, who had extreme reverence for John. Certainly, in the beginning, he himself had great reverence for this just and holy man. But finally, being pierced with the sting of a mad lust for the woman Herodias, he laid his defiled hands on the teacher of purity on the very day he was celebrating his birthday. When Salome, Herodias’ daughter, had danced in order to please him and those who were supping with him, he promised her — with an oath more foolish than any foolishness — that he would give her anything she asked, even unto the half of his kingdom. And she, consulting with her mother, straightway asked for the head of John the Baptist in a charger. Hence this transgressor of the Law, preferring his lawless oath above the precepts of the Law, fulfilled this godless promise and filled his loathsome banquet with the blood of the Prophet. So it was that that all-venerable head, revered by the Angels, was given as a prize for an abominable dance, and became the plaything of the dissolute daughter of a debauched mother. As for the body of the divine Baptist, it was taken up by his disciples and placed in a tomb (Mark 6: 21 – 29). Concerning the finding of his holy head, see February 24 and May 25.

‘But I say to you,’ the Lord says, ‘love your enemies; do good to those who hate you, pray for those who persecute you.’ Why did he command these things? So that he might free you from hatred, sadness, anger and grudges, and might grant you the greatest possession of all, perfect love, which is impossible to possess except by the one you loves all equally in imitation of God.
St. Maximos the Confessor
Unknown, 7th century
Rise from love of the world and love of pleasure. Put care aside, strip your mind, refuse your body. Prayer, after all, is a turning away from the world, visible and invisible. What have I in heaven? Nothing except simply to cling always to You in undistracted prayer. Wealth pleases some, glory others, possessions others, but what I want is to cling to God and to put the hopes of my dispassion in Him (cf. Ps. 72:25, 28).
St. John Climacus
Ladder of Divine Ascent, Step 28: On Prayer; Paulist Press pg. 277, 6th century

The Reading is from St. Paul’s First Letter to the Corinthians 15:1-11

BRETHREN, I would remind you in what terms I preached to you the gospel, which you received, in which you stand, by which you are saved, if you hold it fast – unless you believed in vain. For I delivered to you as of first importance what I also received, that Christ died for our sins in accordance with the scriptures, that he was buried, that he was raised on the third day in accordance with the scriptures, and that he appeared to Cephas, then to the twelve. Then he appeared to more than five hundred brethren at one time, most of whom are still alive, though some have fallen asleep. Then he appeared to James, then to all the apostles. Last of all, as to one untimely born, he appeared also to me. For I am the least of the apostles, unfit to be called an apostle, because I persecuted the church of God. But by the grace of God I am what I am, and his grace toward me was not in vain. On the contrary, I worked harder than any of them, though it was not I, but the grace of God which is with me. Whether then it was I or they, so we preach and so you believed.

At that time, a young man came up to Jesus, kneeling and saying, “Good Teacher, what good deed must I do, to have eternal life?” And he said to him, “Why do you call me good? One there is who is good. If you would enter life, keep the commandments.” He said to him, “Which?” And Jesus said, “You shall not kill, You shall not commit adultery, You shall not steal, You shall not bear false witness, Honor your father and mother, and You shall love your neighbor as yourself.” The young man said to him, “All these I have observed; what do I still lack?” Jesus said to him, “If you would be perfect, go, sell what you possess and give to the poor, and you will have treasure in heaven; and come, follow me.” When the young man heard this he went away sorrowful; for he had great possessions.
And Jesus said to his disciples, “Truly, I say to you, it will be hard for a rich man to enter the kingdom of heaven. Again I tell you, it is easier for a camel to go through the eye of a needle than for a rich man to enter the kingdom of God.” When the disciples heard this they were greatly astonished, saying, “Who then can be saved?” But Jesus looked at them and said to them, “With men this is impossible, but with God all things are possible.” 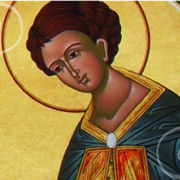 The Liturgical Guide and Bulletin for Sunday, January 31, 2021