Saint of the Day – Mary Magdalene, the Holy Myrrh-bearer and Equal to the Apostles

Saint Mary was from Magdala in Galilee on the Sea of Tiberias, and for this was named Magdalene. When the Lord Jesus cast out seven demons from her, from which she had been suffering, she became His faithful and inseparable disciple, following Him and ministering unto Him even to the time of His crucifixion and burial. Then, returning to Jerusalem together with the rest of the Myrrh-bearers, she prepared the fragrant spices for anointing the body of the Lord. And on the Lord’s day they came very early to the tomb, even before the Angels appeared declaring the Resurrection of the Lord. When Mary Magdalene saw the stone taken away from the tomb, she ran and proclaimed it to Peter and John. And returning immediately to the tomb and weeping outside, she was deemed worthy to be the first of the Myrrh-bearers to behold the Lord arisen from the dead, and when she fell at His feet, she heard Him say, “Touch Me not.” After the Lord’s Ascension, nothing certain is known concerning her. Some accounts say that she went to Rome and later returned to Jerusalem, and from there proceeded to Ephesus, where she ended her life, preaching Christ. Although it is sometimes said that Saint Mary Magdalene was the “sinful woman” of the Gospel, this is nowhere stated in the tradition of the Church, in the sacred hymnology, or in the Holy Gospels themselves, which say only that our Lord cast seven demons out of her, not that she was a fallen woman.

Resurrectional Apolytikion in the Grave Mode

Thou didst abolish death by Thy Cross; Thou didst open Paradise to the thief; Thou didst transform the myrrh-bearers’ lamentation, and didst bid Thine Apostles to preach that Thou art risen, O Christ God, granting great mercy to the world.

Apolytikion for Mary Magdalene in the First Mode

When Christ God had been born for our sakes from the Virgin, thou faithfully didst follow him, keeping His statutes and heeding His sacred laws, O august Mary Magdalene. Hence, as we today observe thy holy remembrance, we receive the loosing of our sins and transgressions through thy holy prayers for us.

Apolytikion of St. Demetrios in the Third Mode

Greatness has been found in danger.  You are champion of the world.  A victor who could turn the nations back.  You boldly encouraged Nestor to defeat Lyaeus in the arena.  Therefore, holy great martyr Demetrios, intercede with Christ our God, to grant us His great mercy.

Seasonal Kontakion in the  Second Mode

O Protection of Christians that cannot be put to shame, mediation unto the creator most constant: O despise not the voices of those who have sinned; but be quick, O good one, to come unto our aid, who in faith cry unto thee: Hasten to intercession and speed thou to make supplication, O thou who dost ever protect, O Theotokos, them that honor thee.

The reading is from St. Paul’s First Letter to the Corinthians 1:10-17.

Brethren, I appeal to you by the name of our Lord Jesus Christ, that all of you agree and that there be no dissensions among you, but that you be united in the same mind and the same judgment. For it has been reported to me by Chloe’s people that there is quarreling among you, my brethren. What I mean is that each one of you says, “I belong to Paul,” or “I belong to Apollos,” or “I belong to Cephas,” or “I belong to Christ.” Is Christ divided? Was Paul crucified for you? Or were you baptized in the name of Paul? I thank God that I baptized none of you except Crispos and Gaius; lest any one should say that you were baptized in my name. (I did baptize also the household of Stephanas. Beyond that, I do not know whether I baptized any one else.) For Christ did not send me to baptize but to preach the gospel, and not with eloquent wisdom, lest the cross of Christ be emptied of its power.

At that time, Jesus saw a great throng; and he had compassion on them, and healed their sick. When it was evening, the disciples came to him and said, “This is a lonely place, and the day is now over; send the crowds away to go into the villages and buy food for themselves.” Jesus said, “They need not go away; you give them something to eat.” They said to him, “We have only five loaves here and two fish.” And he said, “Bring them here to me.” Then he ordered the crowds to sit down on the grass; and taking the five loaves and the two fish he looked up to heaven, and blessed, and broke and gave the loaves to the crowds. And they all ate and were satisfied. And they took up twelve baskets full of the broken pieces left over. And those who ate were about five thousand men, besides women and children. Then he made the disciples get into the boat and go before him to the other side, while he dismissed the crowds.

The Divine Liturgy which we usually hear every Sunday, except during Great Lent had developed over the centuries from the time of Saint John Chrysostom who lived during the 3rd century.

He is considered the author but it was ultimately a work in progress that began as an attempt to relate some very important theological beliefs by way of regular worship.

Although the Divine Liturgy of Saint John Chrysostom was the primary liturgy in Constantinople during the time of Justinian I, who had the Church of the Holy Wisdom (Hagia Sophia) built.

There are three other liturgies we use in our worship cycle.
1)  Divine Liturgy of Saint Basil the Great which is used on the Sundays of Great Lent and on the Feast of Saint Basil.  It is basically the same at St. John Chrysostom’s liturgy but many of the prayers after the Great Entrance are considerably longer.
2)  Divine Liturgy of Presanctified Gifts.  It is technically a Vesper Service, during weekdays, during Great Lent, at which the faithful are able to receive Holy Communion which has been sanctified the Sunday before; hence, “presanctified gifts”.
3)  Divine Liturgy of Saint James is a rarely used liturgy which is ONLLY used, (when it is), on the Feast of Saint James October 23rd and the last Sunday of the year.  It is highly unusual to see clergy use this liturgy, but it does happen, from time to time, to help the faithful understand that we do have options for liturgical worship.
Stewardship

Stewardship Please support your church in year 2018 with your time, talent and treasure.  260 of your fellow parishioners/families have done so.  Don’t delay, pledge today!  Call the office for more
information.
Announcements

Flowers  The Icon of the Theotokos is adorned with flowers for the Paraklisis services.  If anyone wishes to make a donation please call the office.  The garland for the large icon at the iconostasis has already been donated. Thank you!

Car Donation Dr. Hionis has generously agreed to donate all proceeds from the sale of his 2006 Cadillac DTS with 66,000 miles to St. Demetrios.  It has new tires and is in excellent condition.  The asking price is $4,000.  Please contact the church office or one of the Parish Council members if you are interested in purchasing this car while simultaneously helping St. Demetrios.

Large Hall Renovation The molding has been installed, bathroom demolition is progressing and the old dance floor has been removed. 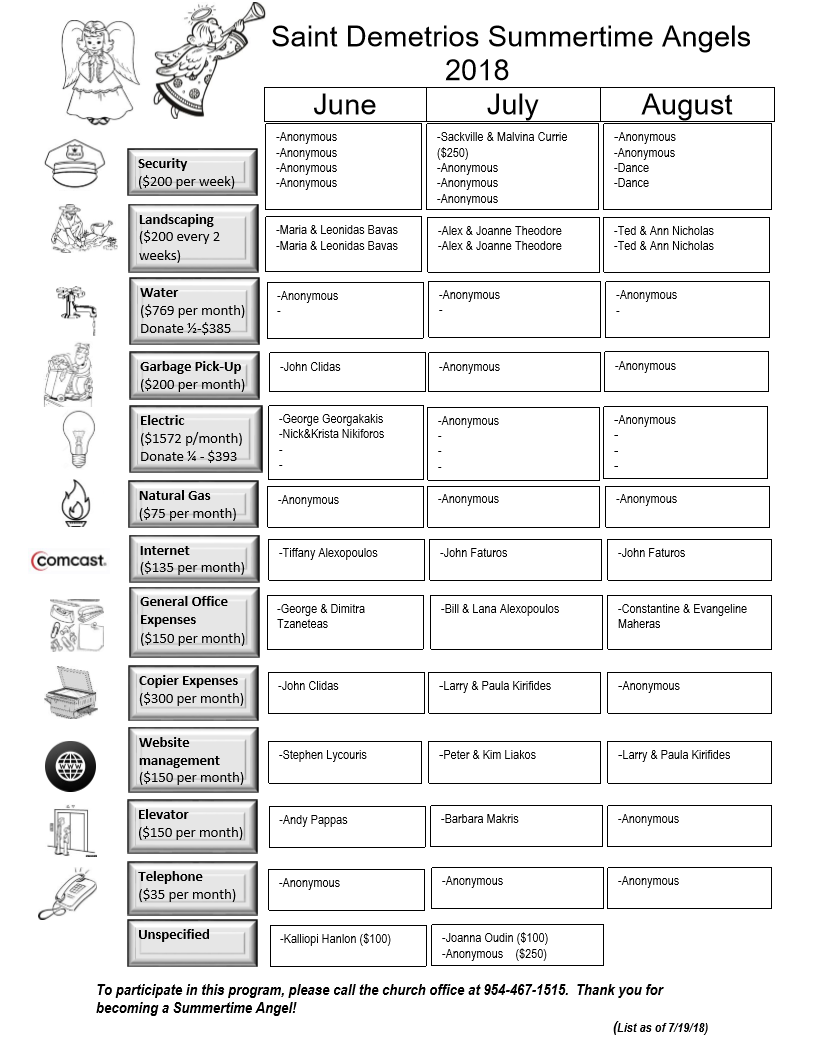 Calendar of Events for the Week

The Liturgical Guide and Bulletin for Sunday, December 5th, 2021